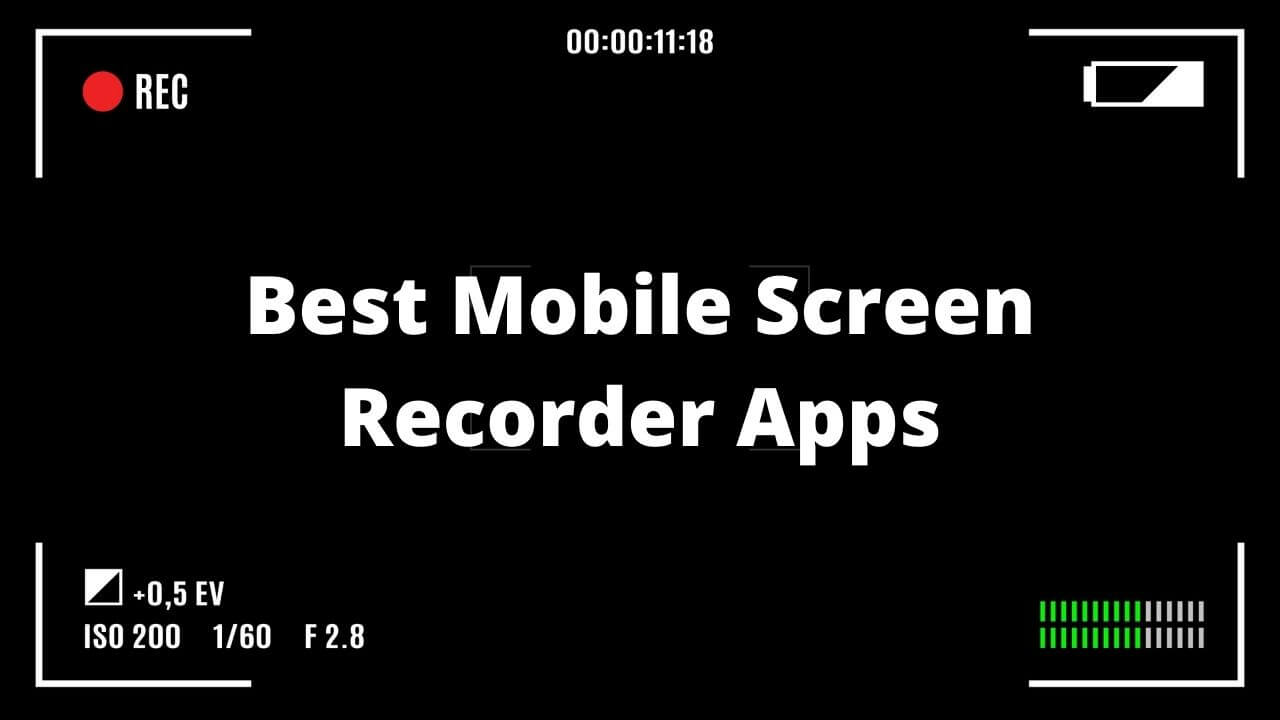 Are you looking for a mobile screen movement recorder? Well, Today I will give you the list of best screen recorder apps for your android mobile. The applications of the Android operating system are currently the most demanding products on the internet. Most of them are available free of cost and highly productive.


Due to the open-source privilege, the developers are free to experiment with different aspects and it results in some wonderful inventions. Screen recording android apps are one of those tools that are very interesting as well as useful for various purposes. The number of screen recording applications for Android is much higher as compared to any other platform like iPhone or windows. Thus, you can have the option to choose the best one that exactly suits your requirement. You may also like to know which are the best video editing apps & photo editing apps.

One can use screen recorders for various purposes such as recording a video chat, gameplay or recording educational tutorial, etc. At the initial stage of Android entrance, recording of the screen was very difficult but extensive advancement in technology has changed the scenario. These recording apps are available for every android version of Kit-Kat and above and are very easy to use. Due to their highly configurable properties, one can use them with any other android application easily. In the below article, you will find a list of a total of 5 applications that will be very useful and productive for any android user.

Below is the best screen recorder for your android mobile. I am using them already so I am recommending you to use them. Most of the YouTubers are using these screen recorder to record their tutorial guide on mobile.

AZ screen recorder is compatible with all android devices supporting lollypop or the above version. Both HD and full high definition options are available for recording along with clear audio output. There is an inbuilt magic button that hides the entire menu while recording a game or tutorial. Some other features that will amaze you are –

Drawing while recording is a unique feature, which is helpful in making an effective tutorial of educational videos.

With a full HD screen recording option, you can record everything that is playing on your android device. There is no restriction of video limit, record as long video as you need. It also features editing features including the functions of trimming and cutting. Without tempering the security by rooting, one can install and use it and there will be not any watermark of the company. Mobizen screen recorder app is compatible with all android platforms of 4.4 and above having any configuration. While recording the footage of apps, users can freely draw on it for making a tutorial for educational purposes.

If you are searching for a screen recorder for an Android device that is free from annoying advertisements then try this one. EZ screen recorder is a simple, lightweight, and ads-free app that has multiple productive features such as:-

Whether you are performing a live broadcast or playing a game, everything is easily recordable through it. Currently, this app has a 4.6 rating due to the multi-functioning capability with lightweight nature. The record manager, drop-down control and customization menu of this app is really interesting and everyone should try this at once.

For video game lovers, who want to show their skills, A Game screen recorder is the best app. Whenever you will start a game on an Android device, it will automatically detect and ask if you want to record it or not. There is no time limit for recording and one can easily pause and resume the recording from wherever they want. It provides full transparency on the screen while playing to avoid any kind of interruption. There is not an in-app purchase; everything is available as preloaded when you will download it from the play store or any other third-party website.

DU Screen Recorder is a multitasking android application that is capable of performing many useful activities for Android users. It is free of cost and reliable application which can do the following tasks –

The main feature of this tool is to record a screen with the highest quality of 1070p @60 FPS. There is not any in-app purchase option; all features are available without any additional cost. It has the capability of recording screens in multiple formats and bit rates so that no one will face the issue of compatibility with any device.

Above all Android, a mobile screen recorder is best for YouTubers or any others. I have used an all-screen recorder and listed it according to my experience with these screen recording apps. Well, I would like to know which one are you using to record your mobile screen movement? Tell us in the comment section. And also share this article with your friends.